If Buy and Hold for higher price is not your thing, maybe you ought to consider trading ROKU Options.

For that purpose, we are offering this comparison of Netflix (Ticker: NFLX) option chain vs Roku Option Chain.

Netflix has become an international streaming giant with subscribers in 190 countries and growing.

Before it reached its current popularity, Netflix (Ticker: NFLX) stock used to trade for less than $1 in 2002.

Not a bad return over six years. 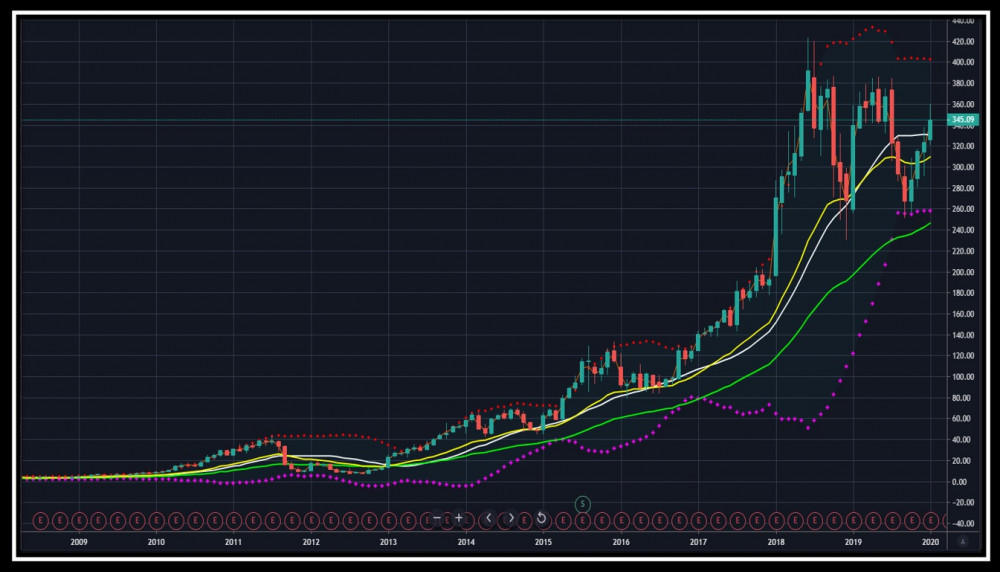 The chart above of NetFlix Stock until mid-2018 is simply parabolic.

That type of growth in three years when the stock went from $60 to over $400 is nothing shy of exceptional.

If that is impressive, how about the almost exact growth rate for its direct competitor Roku ?

Roku is relatively newcomer in the almost crowded streaming arena.

Its platform still focuses mainly on TV shows though the Los Gatos California (Netflix headquarters are on the same Street as Roku’s) based company allows its current 27 million subscribers to access live sports and Music.

Given the recent growth of both stock prices, what is the dominant sentiment of their respective followers in stocktwits community ?

Roku Stocktwits has nearly 57000 Followers on stocktwits versus 207000 for NFLX Stocktwits.

Prior to the recent retreat of it price, Roku Stocktwits sentiment has been very Bullish.

What is not to like in a stock price that gains over $100 in just a few months ?

Many of the fans will often list fundamental reasons why Roku stock (Ticker: Roku) is poised to catapult even higher despite its overbought technical status.

The stock retreat from 170+ to $100 in September alone before rallying back to the same levels in November.

Are These Two Cult Stocks ?

I do not know about you but there is no predicting the long term price action of any stock these days for me solely based on its fundamentals.

Once upon a time, on a piece of paper I drew projection price for NetFlix stock in early 2017 when it was struggling between $100 and $120 just as Roku is doing right now.

This projection actually materialized later that year and in 2018.

All of this to say that, it is very possible for Roku stock to follow the steps of its illustrious competitor.

However, I am not going to go on a limb here to make a case for that eventuality.

Instead, may I suggest we analyze the Netflix Option Chain vs. Roku Option Chain to see which one is more suitable for day traders and swing traders to take advantage of.

Here is a recent video depicting the best way to trade NFLX stock in a volatile market.

Before we do that, I want to present this little piece of research I just generated.

Given than Netflix and Roku are competing for the same pie of the streaming business, one could wonder whether the trade alike or completely opposite.

Meaning that a gain for Roku is a loss for Netflix and vice versa ?

Which in turn would equate to the fact that if NFLX stock is up then Roku stock must be down ?

To answer this question, I generated daily correlation study of their respective stock prices between 2017 and 2019.

The results are as follows:

2017: Correlation Coefficient = -0.40 meaning clear evidence of an obvious relationship between NFLX and Roku

2018: Correlation Coefficient = 0.40 No clear Evidence of a Relationship

2019: Correlation Coefficient = – 0.61 Some relationship may exist but not obvious

So far in 2020: Correlation Coefficient = -0.45 leading to the same inconclusive comment.

For reference, below is the chart of NFLX and Roku stocks. May you judge by yourself. 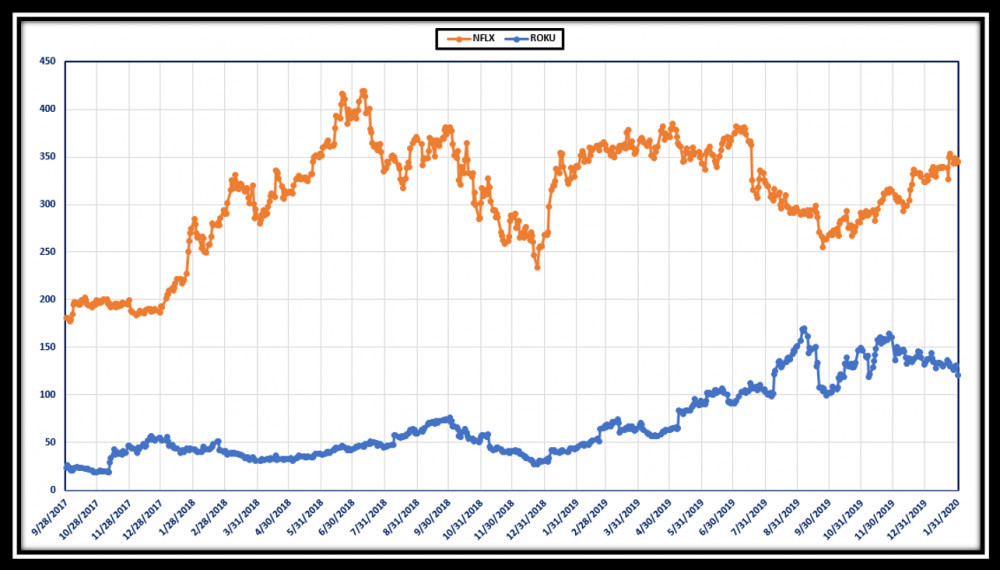 One thing of value we can take away from the above research is that when there is a semblance of a relationship between these two stocks, their price trade in opposite direction.

That is what the negative sign in the correlation coefficient tells us.

It may just be a coincidence of some sort that Roku stock was breaking out while Netflix stock was retreating from its All time high.

Are there investors you are content with the money they made on Netflix stock and are now flowing that into Roku stock ?

That is one the hope of some die hard fans of Roku Stocktwits and some NFLX Stocktwits detractors as well.

Their main argument against Netflix price is the ever rising cost of content as the company tries to gain more and more international subs.

Which One Has the Better Option Chain

Our gauges for this comparison will focus on two main points.

The Implied Volatility, the Liquidity and the Options Spread.

On the other hand, Roku Thirty Day Implied Volatility even after mid February Earnings remains close to 70%.

That is almost double of the Netflix’s one.

What does this mean ?

To get the same chance for NetFlix, the stock will need to move 30%.

Granted, We said Roku has Earnings in mid-February which can serve as a huge catalyst but also as a huge Risk.

Besides, even outside of that event, the Implied Volatility on Roku will remain about the same.

Here is a view depicting Netflix March20 2020 Option chain as it stands today. 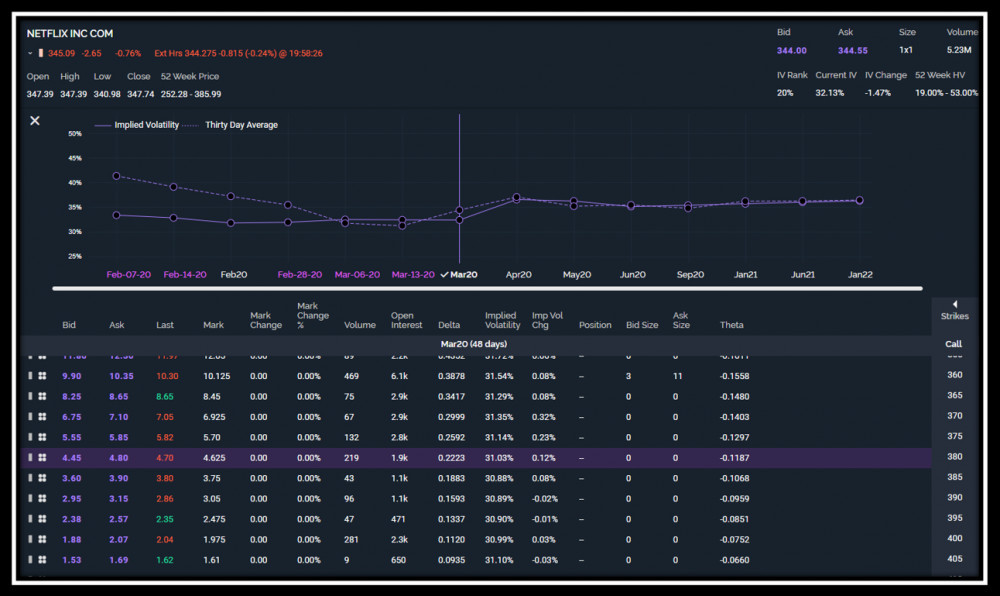 How about the Liquidity

I have to make sure that this is a fair comparison because Netflix is about three times the price of Roku.

Therefore, we can not expect the Spread to be comparable.

Netflix and Roku strike prices for March 20, 2020 are by $5 interval so no difference there.

In order to compare the Option Spread, we are going to normalize the current spread by multiplying Roku option spread by a factor of 3 to reflect the difference in their underlying stocks.

We answered the question on why Netflix Option Chain is better than Roku Option chain.

Though both remain two good stocks to trade Options on because of their inherent Volatility, NetFlix presents better Options metrics than Roku stock at this time.

If you would like to increase your knowledge and further your understanding of these concepts, may I suggest this similar article.

If you would like to see how we put this information in application to make money trading Options, click here.

Please leave us your thoughts, comments, experiences or questions about this content so that we can continue to tailor it to your needs.

African born – French Raised and US matured who speak 5 languages.

Active Stock Options Trader and Coach since 2014.
Most Swing Trade weekly Options and Specialize in 10-Baggers !